As of this morning, my sister has officially been diagnosed with PTSD from nearly dying in February. She says it's okay to give details now--she had an ectopic miscarriage, in which she also lost a Fallopian tube and 50% of her blood (internal bleeding; nobody realized it until she was in surgery). (In the recovery room, a nurse cheerfully told her, "Well! We almost lost you!") So... that was fairly traumatic.

Scout has had a very bad week. The vet recommended we change his food, and... that did not go well. And then he tore into some garbage. I have cleaned up many, many kinds of canine effluvia the last few days. Mom took him to the vet yesterday evening-- 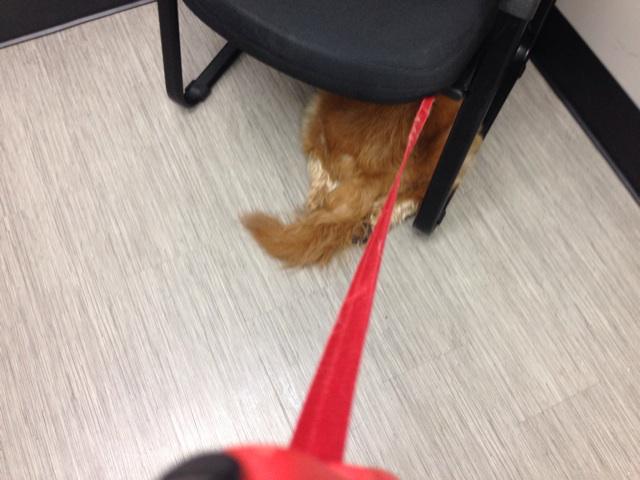 --and today he's there on an IV to replenish his fluids and get his blood sugar straightened out (he's also diabetic). That is the calm, not-freaked-out version of events.

My wrenched ankle is a lot better, although still a bit wobbly; I will probably continue to use the ankle brace from time to time as a preventative measure. Unfortunately, I've started periodically having a burning sensation, sometimes a mild but shooting pain, in my big toe; it seems like I'm inheriting my mother's neuropathy.

My teeth are somewhat less haunted, although they do ache a little today.

We have moth problems.

Lizzie keeps shutting down if I'm away for more than an hour or so, despite the best error-repairing efforts of my frequent Advanced SystemCare scans; I've started pricing Dell laptops again for a Lizzie 2, possibly on a payment plan, because things are not looking good. Yes, it will be a Dell. No, this is not up for discussion. The Compocalypse was one of the worst months of my entire life and I'm not going to deviate from the one brand I have ever been able to rely on now.

Over the last few weeks, I've been dealing with mania and then (relatively mild?) depression, possibly a mixed state in there somewhere. I don't know that I've written anything substantial since the "Takiawase" recap last spring and the short story I finished afterwards; last year was such a parade of awful variegated stress that I was holding on to life by my teeth at several points. In a way, I feel like I'm having to teach my brain how to string sentences together again. That's why I don't post very often; I try, but--okay, right now, I'm stalling on this sentence. I don't even know how to complete a thought, and then I walk away, and then five days pass, and I never post it at all. We'll let that suffice.

I have gotten a lot done on the double-length Twin Peaks pilot recap. I have hopes for that being finished this century. (Lily Rose, who did commentary for me umpteen months ago, continues to wait patiently for me to get my shit together.) "Mukozuke" is closer to being done.

Kristen and I have been working on the Twin Peaks "Northwest Passage" eyeshadow collection, which will come out in July. She and Freddie and I have also been working out early Hannibal season 3 concepts for a set of four colors to come out in May, I think. The Blade Runner collection is already out and complete.

I have finally told a few Great Red Dragon Con stories on the latest episode of Made of Fail, which (ICYMI)

foresthouse and I now cohost. The original theme was just "conventions we have known and loved," but the first twenty minutes are about Sir Terry Pratchett's passing, seguing into Emily's experiences helping run the North American Discworld Convention. I'm still trying to finish my Dragon Con post from last September to go with it, but clearly am having trouble sentencing the words, so we'll go ahead and mention the podcast itself now.

That should be all for now, both good and ungood, I guess. There's even more going on at the moment that I don't really want to get into--I tend to prefer that things settle down before I talk about them. In the meantime, we persevere.
Collapse