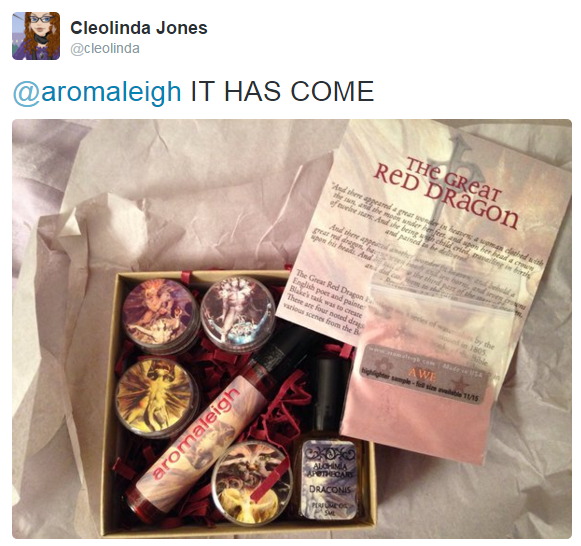 So here is the second Hannibal-themed Aromaleigh boxed set Freddie (@tattle_crime, fourth of her name, may her flame burn bright) and I consulted on. Every now and then you find yourself saying things like "So these eyeshadows are based on the show's Red Dragon storyline, which is about a serial killer's obsession with William Blake paintings, one of which he gets tattooed on his back and eventually eats." Such is the nature of pop culture cosmetics. ( Collapse )

I'm not sure if there will be any extras of the perfume available; another batch might be made, I'm not sure. There are EXTREMELY LIMITED QUANTITIES of the lip gloss, but after the massive amount of interest on Tumblr, Kristen might make a second batch (wait, breaking news--I think she definitely will?). Ah, OFFICIAL ANNOUNCEMENT: EXTRAS WILL BE ON THE SITE--Dragon's Kiss, Awe, Wrath, Becoming, Leviathan, 666; Ddraig Goch is unrelated--STARTING NOVEMBER 15, 9 AM EST. What is that, a Sunday (SUNDAY, SUNDAY!)? I'll try to post some reminders between now and then, but definitely keep an eye out for those.